FIDE recognises for its own tournaments and matches only one system of notation, the Algebraic System, and recommends the use of this uniform chess notation also for chess literature and periodicals. Scoresheets using a notation system other than algebraic may not be used as evidence in cases where normally the scoresheet of a player is used for that purpose. An arbiter who observes that a player is using a notation system other than the algebraic should warn the player of this requirement.

Description of the Algebraic System

С.1 In this description, ‘piece’ means a piece other than a pawn.

С.2 Each piece is indicated by an abbreviation. In the English language it is the first letter, a capital letter, of its name. Example: K=king, Q=queen, R=rook, B=bishop, N=knight. (N is used for a knight, in order to avoid ambiguity.)

С.3 For the abbreviation of the name of the pieces, each player is free to use the name which is commonly used in his country. Examples: F = fou (French for bishop), L = loper (Dutch for bishop). In printed periodicals, the use of figurines is recommended.

С.4 Pawns are not indicated by their first letter, but are recognised by the absence of such a letter. Examples: the moves are written e5, d4, a5, not pe5, Pd4, pa5.

С.5 The eight files (from left to right for White and from right to left for Black) are indicated by the small letters, a, b, c, d, e, f, g and h, respectively.

С.6 The eight ranks (from bottom to top for White and from top to bottom for Black) are numbered 1, 2, 3, 4, 5, 6, 7, 8, respectively. Consequently, in the initial position the white pieces and pawns are placed on the first and second ranks; the black pieces and pawns on the eighth and seventh ranks.

С.7 As a consequence of the previous rules, each of the sixty-four squares is invariably indicated by a unique combination of a letter and a number. 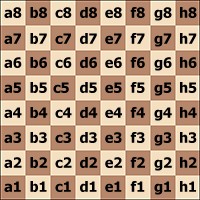 С.9 When a piece makes a capture, an x may be inserted between:

С.9.1 the abbreviation of the name of the piece in question and

С.9.3 When a pawn makes a capture, the file of departure must be indicated, then an x may be inserted, then the square of arrival. Examples: dxe5, gxf3, axb5. In the case of an ‘en passant’ capture, ‘e.p.’ may be appended to the notation. Example: exd6 e.p.

С.10 If two identical pieces can move to the same square, the piece that is moved is indicated as follows:

С.10.3 If the pieces are on different ranks and files, method 1 is preferred. Examples:

С.11 In the case of the promotion of a pawn, the actual pawn move is indicated, followed immediately by the abbreviation of the new piece. Examples: d8Q, exf8N, b1B, g1R.